It will be sealing off the entirety of the Yellow Sea for four days in order to carry out large-scale military exercises. 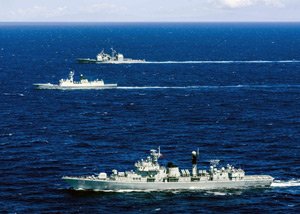 This will be the second occurrence of such drills within the past two weeks. Beijing sealed off the 57,000 square-kilometer region between July 27 and 29 in order for its navy to carry out drills.

What makes this second time around different is the unexpected nature of the announcement.

It's as if the country has reached a breaking point in its position as the lone nation against the entire world.

China's strained relationship with the United States over the past month alone likely pushed the country to this new edge.

And we've been filling you in on every major Washington-Beijing moment therein...

For example, on July 7 we explained how China will likely use its own position as North Korea's largest ally as leverage in the South China Sea dispute - specifically, by refusing to help the United States tame the Hermit Kingdom unless America agrees to leave the disputed maritime region.

On July 19, we highlighted how the U.S. government has flouted China's myriad warnings by arming Taiwan.

On July 26, we explained our suspicions that China's recent military movement on the China/North Korea border looks powerfully reminiscent of its movement just before the Korean War.

And on Tuesday (Aug. 2), we reported that a new anti-China contender joined the ongoing dispute in the South China Sea - Indonesia.

Today's announcement (Beijing's naval exercises in the Yellow Sea) indicates the nation has a particular message for the entire world...

Do Not Mess with China

Malcolm Davis, Chinese defense specialist at the Australian Strategic Policy Institute, said the announcement was about deterring North Korea while acting as a show of force for the United States and Japan.

"It's basically a warning to Pyongyang," he said, according to The South China Morning Post today. "The Chinese would really like to get the North Koreans to back down, but it largely depends on whether [North Korean leader] Kim Jong Un is ready to do that."

News of the expeditious drill also comes as U.S. Secretary of State Rex Tillerson prepares to meet at the ASEAN Regional Forum of foreign ministers in Manila tomorrow.

"Nothing is ever coincidental in international relations - the timing does reinforce the message," Davis added. "But China can only do so much, and I think that the main Chinese focus there will be on avoiding a trade war with the Americans."

As always, we'll keep you updated on further developments. Stay tuned with our "China and All Asia Alerts" profit notification here.

Secret Weapon Set to Foil China's Master Plan: The South China Sea is about to get violent, and the Chinese have an alarming new superweapon they think gives them the upper hand. Or at least, that's what their war hawks think. But they couldn't be more wrong. Thanks to a small $6 U.S. defense contractor with a top-secret technology, the Pentagon has an ingenious new checkmate move designed to stop a Chinese sneak attack dead in its tracks. Click here to learn more...