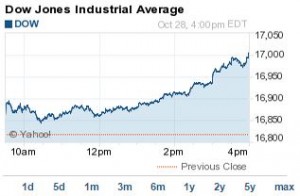 The Dow Jones today added 187 points as U.S. stock markets soared Tuesday, regaining momentum from last week's big performance. The S&P 500 ended the day above its 50-day moving average for the first time in nearly a month. The Nasdaq was up 1.75%. The S&P 500 Volatility Index (VIX), the market's fear gauge, slipped another 10% on the day.

What moved the markets: The markets jumped on positive economic data that includes soaring consumer confidence and a bounce-back from energy stocks. Meanwhile, stronger quarterly earnings reports continue to offset analyst concerns about slowing global growth and its impact on corporate revenue. However, it wasn't all good news. The growth rate in housing prices in August slowed for the eighth consecutive month, while capital goods orders fell for a second straight month.

Most notable economic news: U.S. consumer confidence surged in October to its highest level in seven years. According to figures from the Conference Board, the U.S. consumer-confidence level hit 94.5, shattering economists' expectations of 87.0. This is the highest level since October 2007, before the onset of the recession. The growth in confidence has been fueled by falling gasoline prices and improving labor conditions.

Now Money Morning experts share some of the most important investment moves to make based on today's market trading:

Money Morning Tip of the Day: One of the greatest tech companies in America is facing an ebbing tide in its relevance. That's what Michael E. Lewitt explains in a can't-miss editorial one of America's most iconic brands. And if you're an investor in this stock, you're going to need to hear the truth about why Warren Buffett may soon walk away from this company very soon.