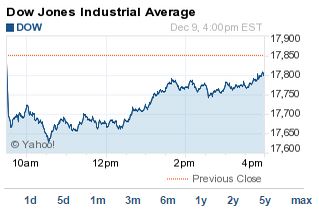 The Dow Jones today ended the trading session down 51 points, fueled by a global equities sell-off. The markets did bounce back from session lows in the final hour as investors found value on several oversold stocks. The price of gold surged back above the $1,200 level, rising nearly 3% on the day. The VIX, the market's volatility gauge, jumped 5% on the day.

What Moved the Markets Today: Markets slumped Tuesday on renewed global concerns. The Greek stock market crashed this morning, falling more than 13%. This is the worst one-day turn for the foreign market in its history. Shares of the National Bank of Greece (NYSE ADR: NBG) fell 13.5%. This morning, Greek leaders announced plans to move up national presidential elections by two months to Dec. 17. Investors also began to murmur about the possibility that the U.S. Federal Reserve could alter its pledge to maintain record-low interest rates for a "considerable time." The Fed Open Market Committee will meet again next week to discuss the future of U.S. monetary policy.