The Dow Jones plummeted 170 points Friday on mixed data about the U.S. employment market and a renewed plunge in oil prices.

Although the U.S. jobs report indicated the unemployment rate fell to 5.6%, wages also fell across the board. Hourly wages slipped by five cents in December, erasing November's gains. 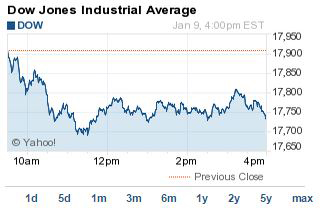