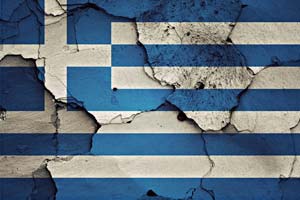 U.S. stock futures for Monday, Aug. 3 forecast a nine-point gain for the Dow Jones Industrial Average despite news that Greece's stock market crashed this morning after reopening for the first time in five weeks. The Athens Stock Exchange cratered more than 22% this morning on its first day of trading after the nation accepted a bailout package from its creditors last month. Shares of the country's four top banks, including the National Bank of Greece (NYSE ADR: NBG), were down roughly the daily limit of 30%.

Yesterday Apple breached its 200 moving average. Is this the sign the bears have been waiting for? I am waiting to see Face Book ("FB") to follow suit. FB has revenues of less than 20bn but sits on a market cap of 250bn. Oil continues its downward spiral and the junk bond prices are acting more likes crashing stocks. Oil and Gold are suggesting that bursting chinese bubble will cut global demand for commodities in the second largest economy. The chinese small investor is "dead" under a pile of debt thanks to the 1:5 margin account leverage. China's stock market now mirrors the US stock market in 1929.

If these are not bear triggers, then I don't know what is. Don't think you can hide under Google or Apple when the carnage begins. That strategy proved painful in the dotcom carnage of 2000. Cisco was the Google of that era. In 2000 Cisco peaked at around 65.00 but the crash Cisco dropped to 16.00 and over the last 15 years has never seen those highs.