For Oct. 15, 2015, here is your stock market news and stocks to watch based on today's market moves… 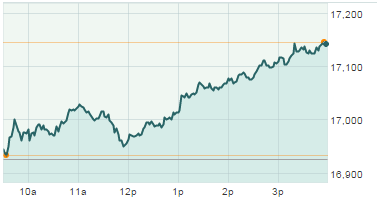 The Dow Jones Industrial Average today (Thursday) rallied past the 17,000 mark, adding 217 points after new economic data suggests the U.S. Federal Reserve is more likely to delay a hike to interest rates. This morning, the U.S. Labor Department reported weekly jobless claims slipped to a 42-year low. However, weak manufacturing reports and a lackluster consumer price index are likely to affect the Fed's decisions during the October FOMC meeting.

The S&P 500 Volatility Index (VIX), the market's fear gauge, slumped a little more than 9% on the day.