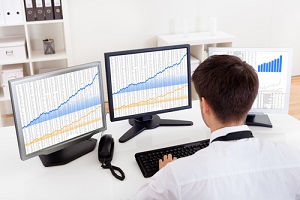 Over the weekend, G20 financial leaders all pledged to use "all policy tools" to help bolster economic growth. We can expect more of the same policy efforts we've seen over the last seven years, including the possibility of "helicopter money."

Academics are growing more desperate to prove that the theory they learned in graduate school works.

But don't expect a reduction in regulations, taxes, or education to unleash a new class of entrepreneurs.

Dow Jones futures projected a 12-point gain as a busy earnings week and economic calendar kicks off. Today, we want to focus on the Dallas Federal Reserve's manufacturing report. This region has been held back by a recent slump in oil prices.

The U.S. Federal Reserve is back in focus as the FOMC meeting kicks off tomorrow. Policymakers will discuss the timing of the next interest rate increase. Although the Fed has said it wants at least two more interest rate hikes by the end of 2016, it's becoming clear that won't happen. CME Group projects just a 2.4% chance that the company will raise rates in July. CME projects a 40% probability that the Fed will increase rates in December. If the Fed actually does raise interest rates in 2016, though, this is the best stock to buy.

However, investment bank Morgan Stanley (NYSE: MS) says we shouldn't expect a rate hike. In fact, MS believes that rates will remain unchanged until 2018. That could have serious consequences if you have a checking or savings account. Here's how to protect your money and your portfolio from the Fed's sluggish action on interest rates.

The Democratic National Convention kicks off this week despite a massive email leak that shows party leaders had colluded on behalf of Hillary Clinton. Wikileaks released 20,000 emails (trending under the tag #DNCLeak) of communications among Democratic National Committee members. The most damning emails questioned the religion and faith of Sen. Bernie Sanders (D-VT) and proved the leaders were biased towards Clinton. On 60 Minutes, presumed nominee Hillary Clinton said she had no knowledge of any collusion efforts.