For Sept. 1, 2015, here's how the Dow Jones Industrial Average did today, earnings reports, top stock market news, and stocks to watch based on today's market moves… 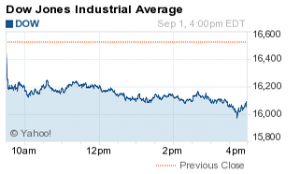 The Dow Jones Industrial Average today (Tuesday) cratered 469 points as investors weighed new concerns over manufacturing growth in the world's second-largest economy. This morning, the New York Stock Exchange implemented a little-used provision called Rule 48 in order to preempt panic selling and ensure orderly trading in times of extreme volatility. This is the second time the NYSE has implemented the rule in the last seven trading sessions.

Two reports indicated that China's manufacturing sector is ensnared in its worst downturn in several years. The nation's August Purchasing Managers' Index (PMI) dipped to 49.7, down from a reading of 50 in July. Meanwhile, U.S. manufacturing activity was on the decline as well. The August ISM manufacturing index slipped to 51.1 from 52.7 in July. This is the weakest ISM report in more than two years.

Financial stocks were sliding this afternoon as weak economic data lowers the probability of an interest rate hike by the Federal Reserve. Shares of JPMorgan Chase & Co. (NYSE: JPM), Wells Fargo & Co. (NYSE: WFC), and Citigroup Inc. (NYSE: C) all slipped more than 4% on the day.