For Sept. 2, here's how the Dow Jones Industrial Average did today, earnings reports, top stock market news, and stocks to watch based on today's market moves… 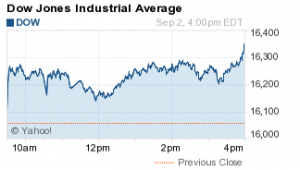 The Dow Jones Industrial Average today rallied more than 293 points as tech stocks rebounded from yesterday's downturn. The markets hit their highest level today after the U.S. Federal Reserve's Beige Book indicated that tightening in the labor markets could fuel wage gains in a number of U.S. sectors. This morning, ADP reported the U.S. private sector created 190,000 jobs in August, down from economist expectations of 201,000. Growing optimism over the U.S. economy has offset some concerns about stagnating growth in the Chinese economy. On Thursday and Friday, China's stock markets are closed for the World War II Victory Day parade.