For Sept. 9, here's how the Dow Jones Industrial Average did today, earnings reports, top stock market news, and stocks to watch based on today's market moves… 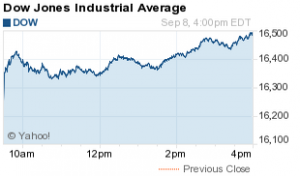 The Dow Jones Industrial Average today soared 390 points as investors rallied around expectations that China's central bank is poised to loosen monetary policy in order to expedite growth in the nation's economy.