For Sept. 9, here's how the Dow Jones Industrial Average did today, top stock market news, and stocks to watch based on today's market moves... 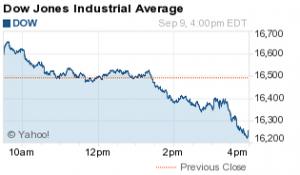 The Dow Jones Industrial Average today (Wednesday) cratered more than 239 points as oil prices plunged and a late sell-off reversed gains made in early hours of the trading session. Investors remain in a period of volatility as they try to make sense of monetary policy in China, the United States, and Europe.

The downturn follows a rally in global markets, where the Nikkei had its best single day in nearly seven years, rising more than 7.7%. Today, Japanese Prime Minister Abe Shinzo promised to slash the nation's corporate income tax - which is the highest rate of any developed country - by at least 3.3% over the next year.

Despite the downturn, Netflix Inc. (Nasdaq: NFLX) was one of the day's top performers on the S&P 500, adding 4.5%.  The streaming giant reversed a seven-day trading loss after Oppenheimer reissued its "Outperform" rating on the stance that a buying opportunity had presented itself ahead of today's Apple Inc. (Nasdaq: AAPL) corporate event in San Francisco.
The S&P 500 Volatility Index (VIX), the market's fear gauge, added more than 5.8% on the day.